When VMware brought NSX to market, I was instantly hooked on the technology, being a hybrid engineer in networking and virtualisation. I took every bit of information that was there to educate myself on NSX. When VMware launched the NSX education track (VCP-NV, VCIX-NV, VCDX-NV), I started preparing to test myself on NSX. After passing the VCP-NV in October, I started to prepare for VCIX-NV.

Important to note is that the VCIX-NV exam is based on the NSX for vSphere edition, NSX for Multi-Hypervisors doesn’t make an appearance. As VCIX-NV is an exam where you actually have to do configuration and installation, I was very lucky to have an employer that is the VMware NSX Partner in the Netherlands. That is currently the only way (next to buying it) to get your hands on NSX and play with it. You can also play a little with it in the VMware Hands on Labs, but that’s a controlled environment. You can’t break and fix everything in a controlled environment. 😉

The VCIX-NV blueprint is pretty broad, but has a lot of very specific tasks as well. The best way (for me) to study these types of exams is to simply print out the blueprint and really go do them, step by step. Run through the subjects, break and fix the subject and document any specifics. I’ve been doing this publicly in my VCIX-NV Study Guide. My timing was a little off though, as the exam was scheduled before I could finish the topics. I’m aiming to finish the guide before the year is up and pour it into a nice PDF for people to consume.

Now on to the exam itself!

As mentioned, the exam is one where you get tasks (18 to be precise) which you need to complete and you will be graded on the configuration and installation you do. It is a lot like the VCAP-DCA exam. It is so much like the VCAP-DCA exam, that you should not be surprised if you see any VCAP-DCA logos in the exam.

Currently the exam feels like an alpha or beta exam. There are a lot of mentions of the VCAP-DCA (the logo is even on the printout you get at the end), there are mistakes in the questions (I won’t go into details, but don’t always take them literately and read them very carefully) and the latency.. Oh the latency. I’m pretty sure the lab is hosted on the west-coast of the US, making it a horrible experience for people in Europe. Add latency to the general slowness of the vSphere Web client, you’ll be triple checking whether you clicked something before something actually happens. VMware, please put a lab in Europe and please have someone update the exam to get rid of all the mistakes! (or is it on purpose?!)

The configuration and troubleshooting tasks in the lab are pretty straightforward and are even pretty fun to do. The tasks range between installation and administration activities and are pretty well mirrored to daily activities on a production environment. You have 3,5 to 4 hours (depending on your locale) to complete the exam, of which I needed every minute (had 3 minutes to spare, after a single review). If you have no lag, I’m pretty sure you can do it with an hour to spare.

When you’ve completed the exam (don’t forget to click ‘Finished’ and have the screen return to the VUE login), you will get a printout to prove you sat the exam. Scoring the exam happens later, within 15 business days. There are various grading times reported through the community, from 24 hours to 12 days. I got my results 15 hours later! I’m especially grateful to VMware for including the score report in the notification email, instead of having to login to the Education portal. 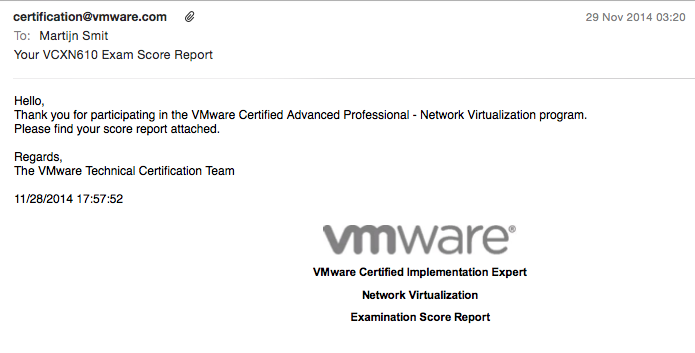 Good luck on your own VCIX-NV preparations and be sure to check my VCIX-NV Study Guide! 🙂