Hopefully you’ve heard the good news that VMware has acquired VeloCloud, including SD-WAN into the software-defined portfolio. This is especially exciting to me, as I get to branch out a little more into the WAN space, being in the Networking & Security BU. For me, it also means NEW TOYS! 🙂

VeloCloud primarily runs on hardware in a few flavors (no software without hardware), but they also have a VM form factor (which I’m sure will get extra attention in the future). I managed to get a hold of an OVA to run in my lab. While you can expect more around VeloCloud by VMware ™ blogs from me in the future, I’m kicking things off by documenting how to deploy in on vSphere. This, simply because there isn’t much information yet, their documentation is mostly focused on the appliance form factor.

Before deploying any virtual VeloCloud Edge (VCE), you need to have the required VeloCloud Orchestrator (VCO) configuration in place. I’m going to assume you’ve already created Networks, Profiles and the Edge inside VCO.

There is a VM form factor, which you can get in OVF form. Get this from your VeloCloud representative, as there’s no public download available.

When you have the OVF and VMDK file that goes with it, you can start the deployment process. In the vSphere Web Client, right click on the cluster or host you want to deploy and select Deploy OVF Template..

Select Local File and then select both the .ovf and .vmdk: 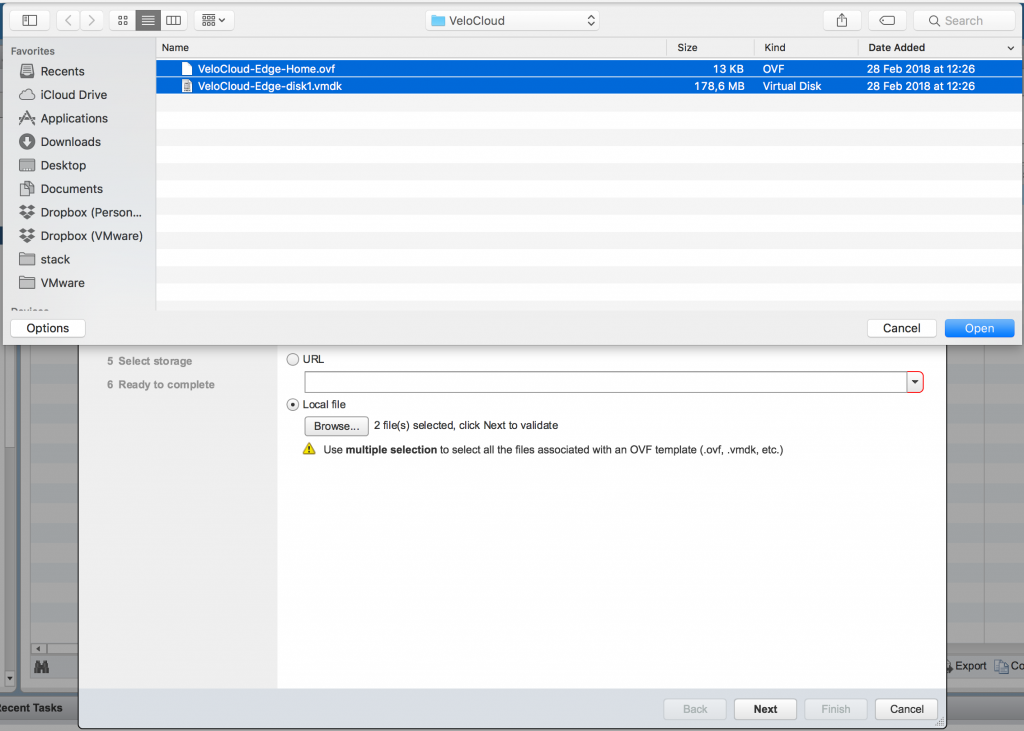 Enter a name for the VeloCloud Edge VM and the location: 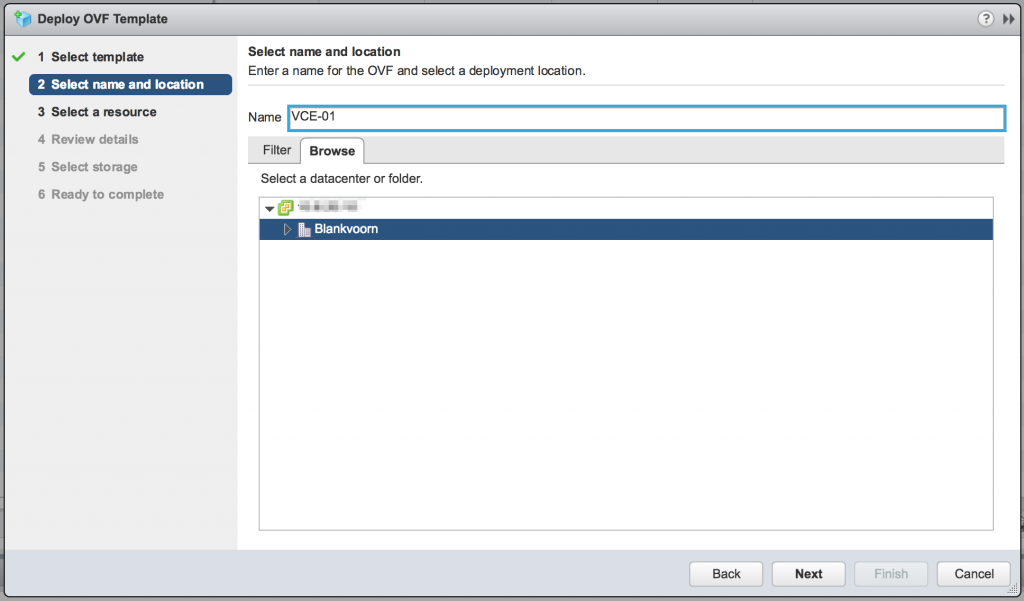 Select the host or cluster where you want to run the VM: 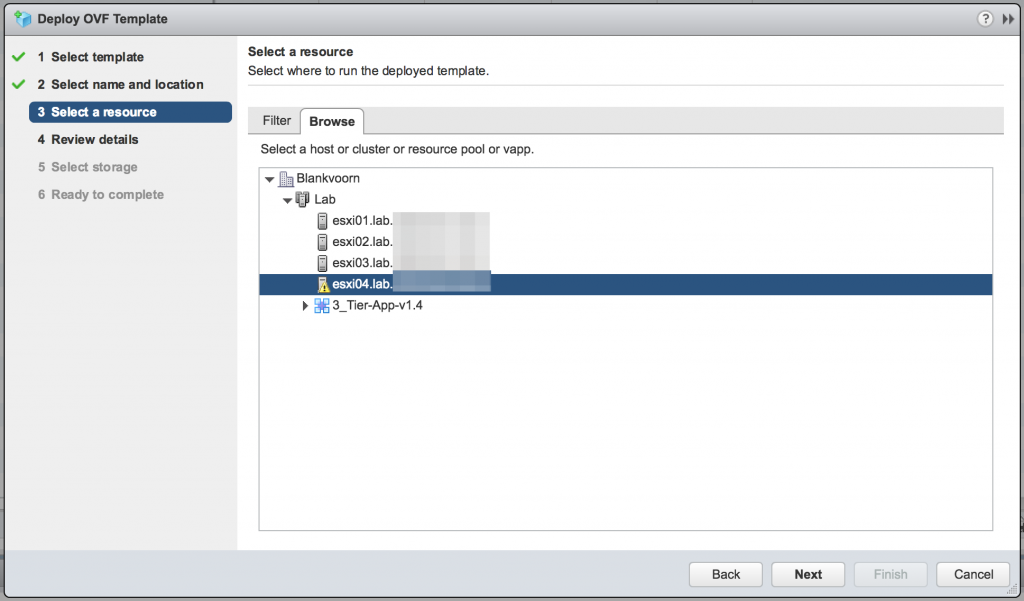 The next page is an overview of the VCE template which you can click through. On the next page, select the datastore on which the VM should land. 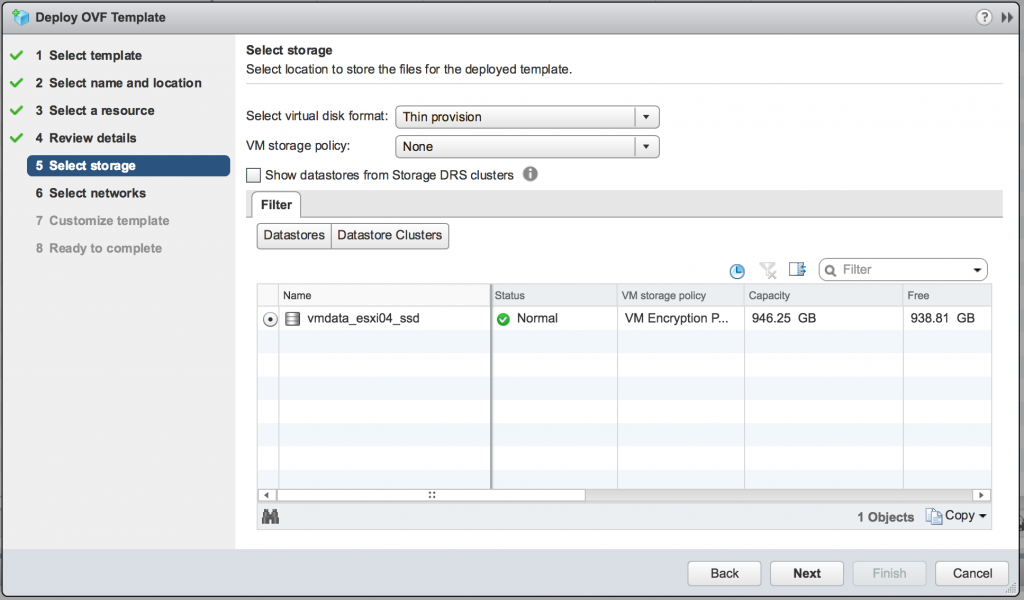 Now for the networks. The VCE has 6 vNICs and the configuration will depend on your Profile in VCO. By default, GE1 and GE2 will be internal facing interfaces and from GE3 to GE6 will be WAN interfaces. In this deployment, I’ve selected a VXLAN network called VeloCloud_Internal for the client side of the VCE and the VXLAN network called TL-DLR-01-VM-01 for the WAN side of the VCE. The rest of the interfaces I’ve connected to the Internal-only portgroup, which doesn’t go anywhere.

Note: the interfaces have a mixed Connect At Power On settings, I’ll get to that later when the VCE has been deployed. 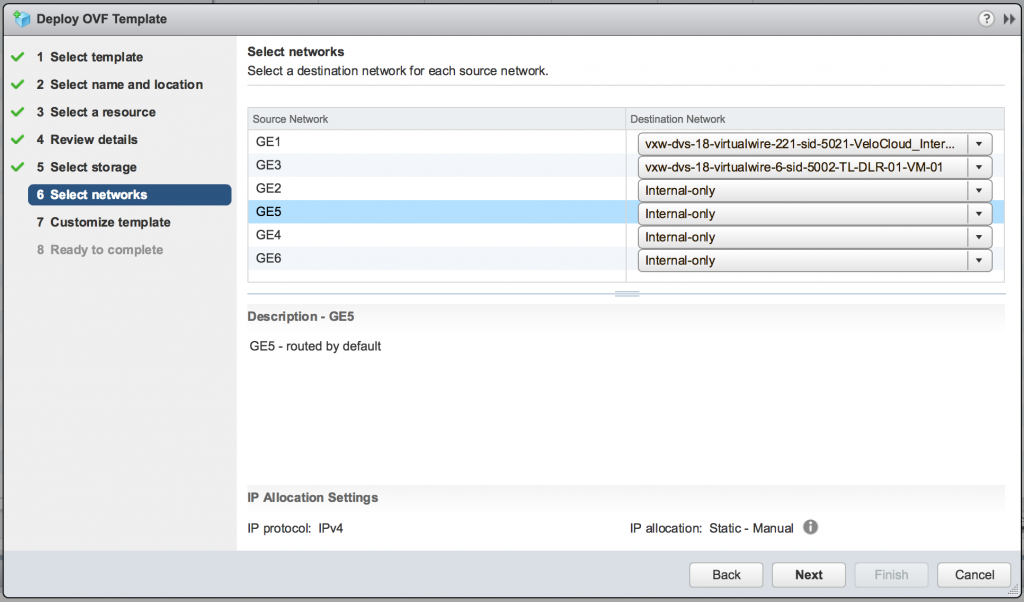 Next, you will get the template options. The idea is to give the VCE a password, activation code and hostname of your VCO instance. I’ve deployed the VCE quite a bit and each time the boot process did not respect all these options. Plus, if you have outside connection yet and you give it your VCO details, you’ll get a pretty annoying message saying it couldn’t activate on the prompt, every 30 seconds or so.

So leave this empty for now: 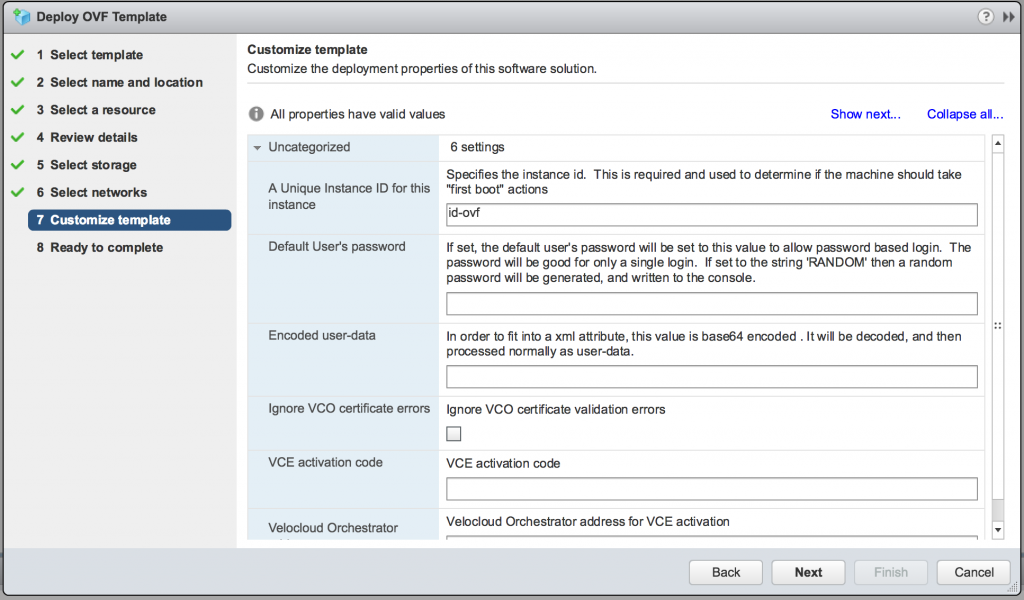 Review your options and click Finish to start deployment. 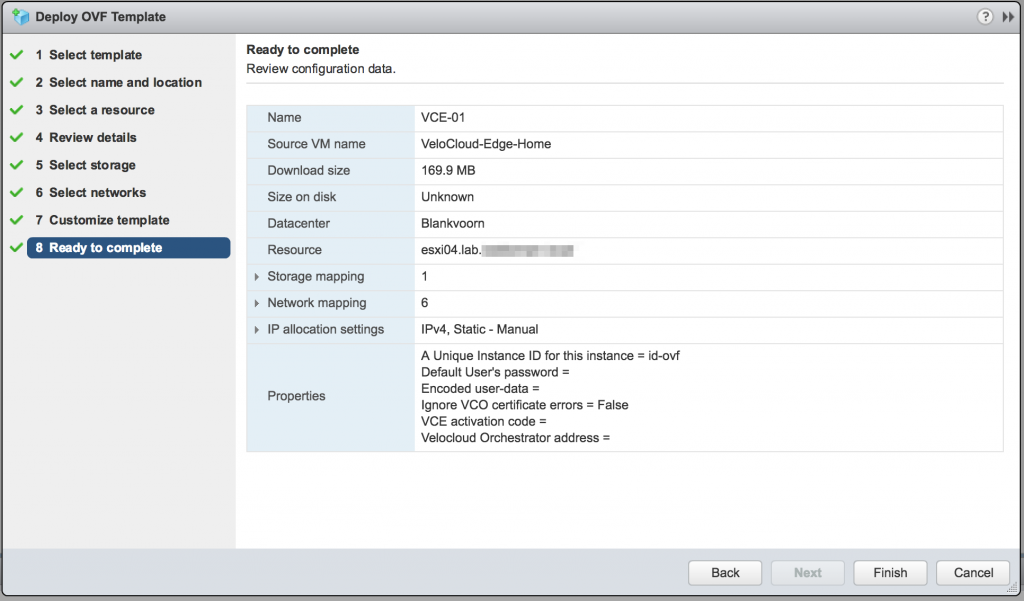 Get a cup of coffee or watch the progress bar go to 100%. After it’s done deploying, don’t turn it on just yet.

We need to modify the Connect At Power On settings of the VM interfaces. As mentioned, the OVF doesn’t connect all interfaces at power on and you’d want to make sure your GE1 and GE3 interfaces are turned on at power on. I’ve deselected all the rest: 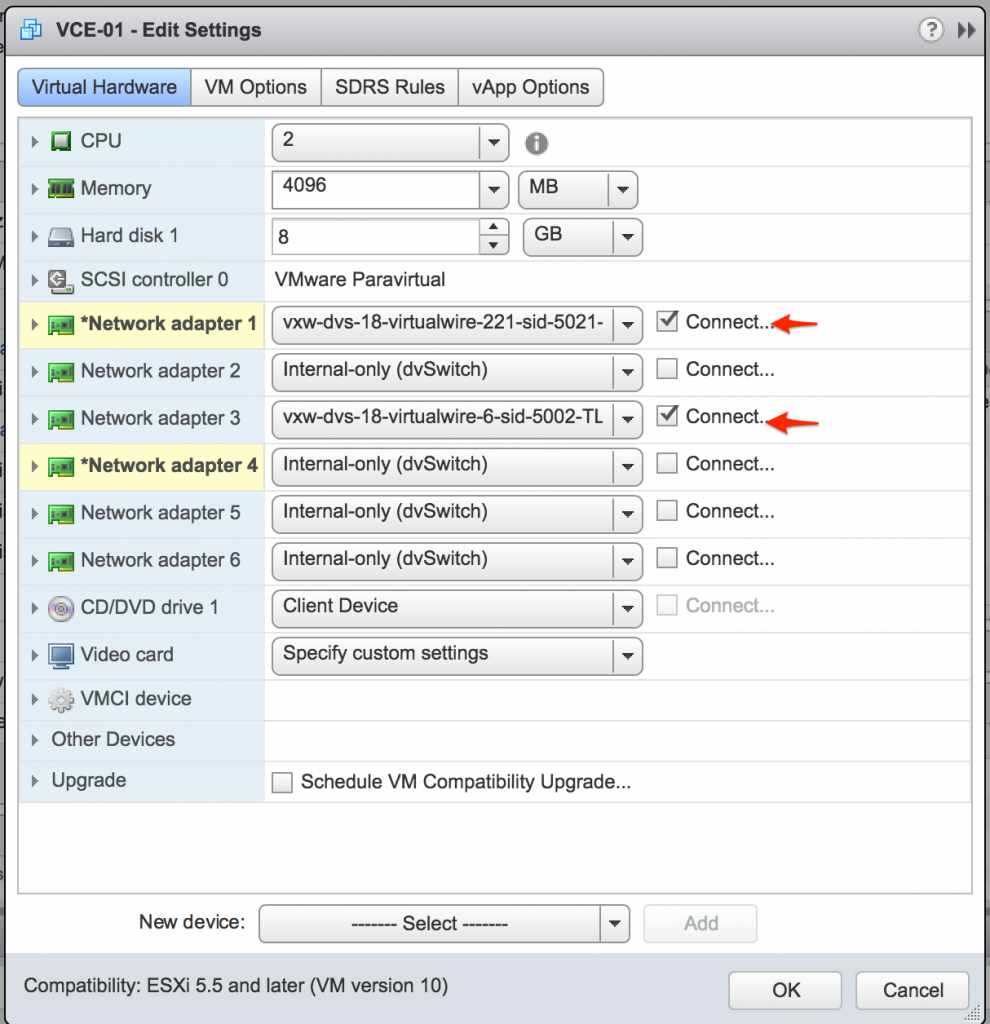 Then turn on the VM and open the console.

Once it’s done booting (you’ll know when an enter gets you a login prompt), log onto the VCE with username root and password velocloud (login not pictured). When you’re in, we need to do 2 things: set an IP address for the GE3 (WAN) interface and activate the VCE against VCO. We’ll use the following commands:

The first command is to set the IP configuration to DHCP. If you’d like to use a static IP address, use the following command: 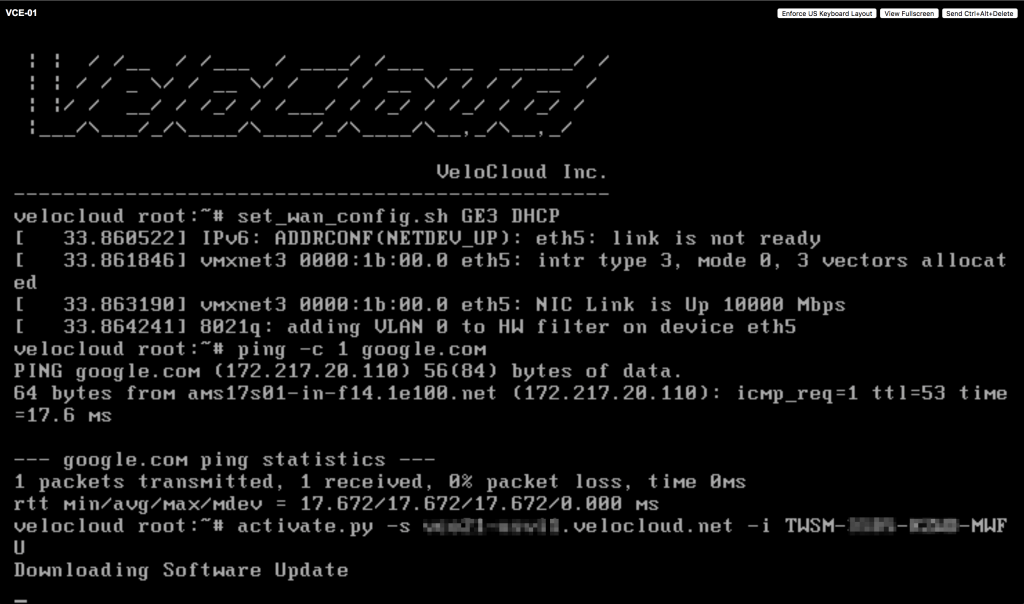 The VCE is a BusyBox Linux adaptive, so you can use commands like ping and traceroute to verify your connectivity. If the activation succeeds, the VCE will download the latest software version and apply it. If the activation fails (for instance when the activation code is wrong), it will tell you what’s wrong.

It will take a minute or two to upgrade itself. Just look for the Activation successful message it will display before rebooting into the new software and configuration it got from VCO. 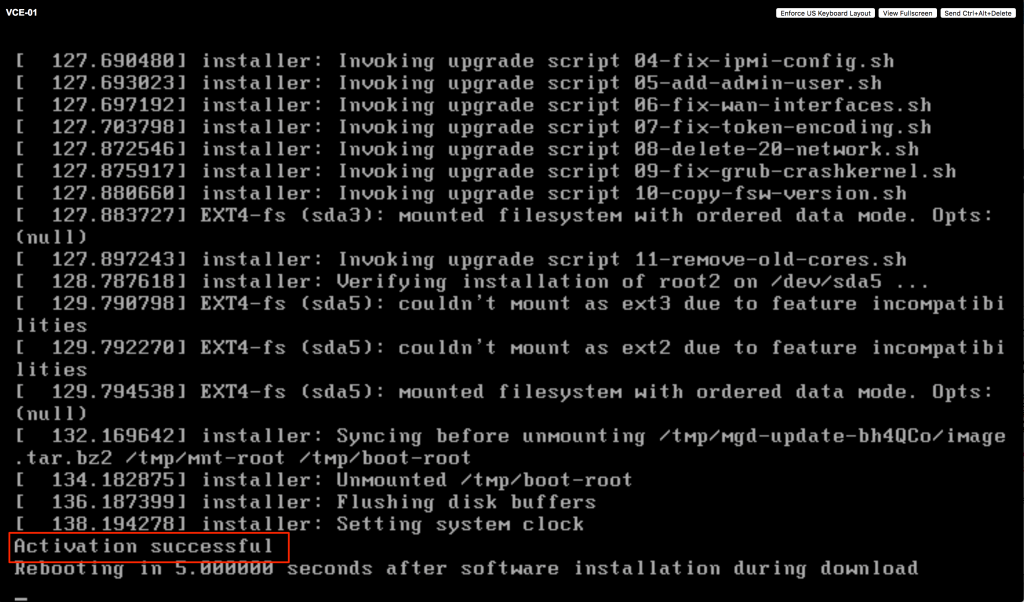 And after a few minutes, once the VCE has been rebooted and it has connected to VCO, you will be able to verify that VCO also sees the VCE and everything is connected and activated:

That’s it! You now have a running virtual VeloCloud Edge and connected it to the VeloCloud Orchestrator. Keep an eye on more VeloCloud content in the future, while I continue learning about the platform and options.