Ever since I moved to a new house, I’ve been stuck to a pretty bad ISP. With no fiber, a few kilometers away from the DSL termination pop (so a max of 10Mbit on ADSL), it just leaves cable. Speeds aren’t terrible, I get a 400Mbit line for E 60,- p/m. Latency spikes and jitter are horrible, but that can be expected on a cable network. Especially fun when doing internet calls. 😉

All in all, I haven’t been enjoying my internet connection for a while and I wanted to do something about it.

After dismissing the thought of moving house again, I decided to get an extra low speed, but quality connection. ADSL with a trusted provider turned out to be the best option. I planned on using VeloCloud to balance between the connections, but the new connection was actually delivered a few weeks early. I didn’t have the VeloCloud design ready yet, but did wanted to hook up the new connection and test it out.

Enter the Ubiquiti EdgeRouter I already had in place, as it appears it is able to load balancing between multiple connections.

The EdgeRouter is a really good router for the network enthusiast, as it is packed with features that you can geek out with. One of those is the ability to create load balancing groups between connections, for outgoing network traffic. I linked to an article from Ubiquity themselves but found it lacking commentary and it missed a couple of extra things I wanted to do, so I decided to do a write-up of my setup.

This is the topology I was going for: 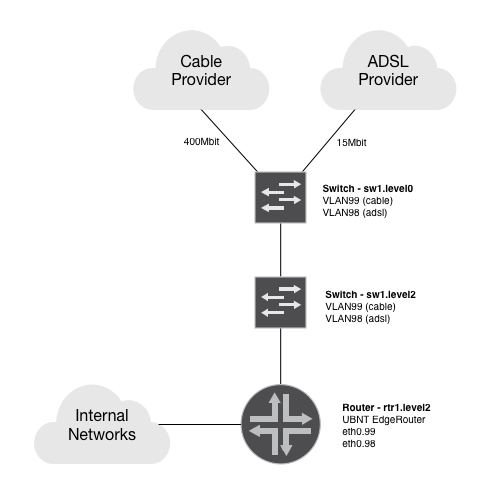 This was already in place for the cable provider, so all I did here was bring in the ADSL provider to a VLAN and transport that up to my EdgeRouter.

Let’s get into the weeds and begin with the interface configuration. All configuration is going to be done by the CLI by the way, most of this cannot be done via the UI.

As pictured earlier, I’m using VLANs to transport the internet connections to the EdgeRouter. This means the interface configuration looks like this:

A couple things to note:

Just to make sure I paint a full picture, below is an overview of some extra configuration (firewall & NAT) which is needed to get this working:

So far we’ve only connected 2 connections which uses the cable connection as a primary connection and failover to the ADSL connection when the cable fails. This is also a long failure, because the DHCP lease needs to expire before the routing switches over. This is one of the issues that the WAN load balancing within the EdgeRouter fixes by doing monitoring on the connection.

Once you have this config in place, you can verify the monitor is working by executing this:

A couple things to note:

Once the load balancing group is applied to an internal interface, you can verify that is it balancing traffic by executing this:

The WAN Out/In counters will go up the more they route traffic and the table 201 and 202 are filled with the routes for the different connections.

Of course, I wanted to make some exceptions to generally load balancing and failover. One of these examples was that my download server always used up the cable connection (with its 400Mbit) instead of bothering the ADSL line and that my own computer was to use the ADSL line as primary, only failing over to cable if the ADSL line goes down. The latter was important because the ADSL line is much better when it comes to voice calls, webinars, etc.

To facilitate a configuration where something used the ADSL connection as primary and the cable connection as secondary, I had to create a new load balancing group:

You’ll only notice 2 differences: I removed the weights and added failover-only to eth0.99 (which is the cable connection). This gives the result that eth0.98 will always be used unless the ping test fails, which will make it failover to eth0.99.

To effect this new load balancing group for a specific client, I’ve used this snippet:

This inserts a rule in the existing ISP_BALANCE ruleset where the load balancing is being called, takes a source address-group (in this case named Martijn-iMac-Macbook) and uses that to decide to redirect the traffic to the new load balancing group. The address group simply contains the IP addresses that my iMac and Macbook have.

Another variation on this is doing this on a destination basis:

Here I make sure that a VPN tunnel endpoint on the internet (IP included in the address group LD-VPN-GW-EXT) always goes via the ADSL connection and fails back to the cable connection if needed.

While this is a temporary situation for me (while I figure out a network overhaul and include VeloCloud for this functionality), the EdgeRouter really does a good job with load balancing between multiple links and the possibilities to make exceptions based on source or destination are awesome.