This is the second post in a series on how to use PowervRNI to manage Applications within your vRealize Network Insight environment. If you’d like to learn about managing Data Sources with PowervRNI, check here.

The first thing you should know is that the application container has a few concepts to it. The application itself, then tiers that make up the application (for instance, the easy 3 tier app: Web, App and Database tiers) and inside the tiers there are rules that determine what VMs will be placed in that tier. These rules can be based on the same criteria as you can use in the search engine, so you can get really creative. Below is a visual explanation of the different concepts: 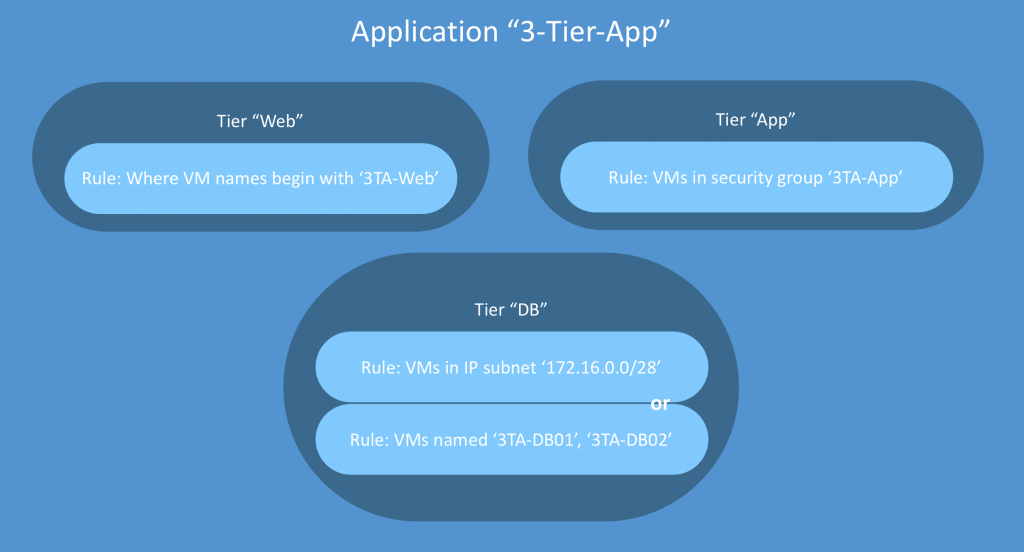 So, to automate the creation of the application you need to be able to create applications, then the tier and the rules that will place VMs into the tiers. Here are the cmdlets in PowervRNI which will help:

An application is just an empty container, so creating it is easy and straightforward:

That’s it. The return value is the Application object, which contains the newly created entity id and a few other details. After running this, you can verify using the interface:

Once you have an application container, you can define the tiers. Due to some limitations of the current vRNI API, you can currently only use VM names and NSX Security Groups to define the tier membership. Below is an example that uses both VM names and security groups:

I’ll go through what happened here step by step:

If you then validate this in the interface, you’ll see a newly added Web-Tier with the provides rules in it. You’ll also notice that there’s a “2 Vms” behind the rule. This is because I have 2 VMs called 3TA-Web01 and 3TA-Web02. Both are also in the security group ST-3Tier-Web.

Using the cmdlets described above is pretty quick, but imagine doing that a couple 100-times in a greenfield environment. Not fun.

With that in mind, I’ve put up an example on how to import a lot of applications at once in the examples/ directory called: application-bulk-import.ps1

* Yes, it’s technically not a CSV as I used ‘;’ for the separations. But this way Excel can read it into columns. 😉

As you might notice, the same Application can contain multiple lines. This is because each line represents an application tier and you can have multiple tiers in 1 single application. You can use either the Security Group or VM Names column to create the filters, or you can use both columns if the VMs need to have a certain name and be a member of a specific security group.

Once you have the CSV filled with data, you can run the script as follows:

That’s it! Let me know if you have any questions. PowervRNI can be found on GitHub and on twitter for the latest news.