VMware has released vCenter 5.5 Update 2 today. Most of the updates are basic product support updates, like support for Microsoft SQL Server 2014 and removing support for IBM DB2. There are a bunch of bug fixes in there as well. For the full list, check here.

One particular change was a bit buried in the release notes and was not mentioned in the blog post, which tries to say it’s not a major change. However, for VMware administrators, this might be the most important change in Update 2 and the reason they will upgrade; In Update 2, you will be able to edit virtual machines with hardware version 10 again!

Who hasn’t seen this message: 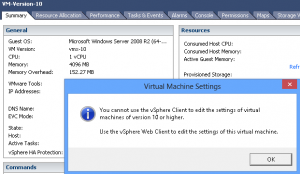 I’m very excited to show that this is the new message you get, before the Virtual Machine Properties window pops out and you’re able to change it!

One thing that’s kind of sneaky: if you connect a vSphere Client version 5.5 to a new vCenter 5.5 Update 2, is that the client simply connects. They are compatible, so the client does not prompt you to upgrade. You will not be able to edit VMs of version 10 unless you have upgraded the vSphere client.